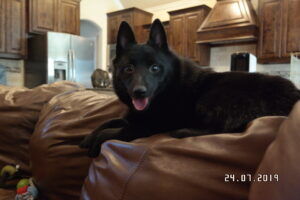 A dog named Spencer is all about a difficult Schipperke dog that I Pet Sit for. I am a pet sitter for DFW Pet Sitting Services. And before I care for any pets, I first have an interview with the client and the pet(s).

Schipperkes are not good with strangers

From the first moment I entered the house Spencer was a nonstop barker. His owner had him in a cage in the family room and as I approached him, he bared his teeth in a threatening growl. 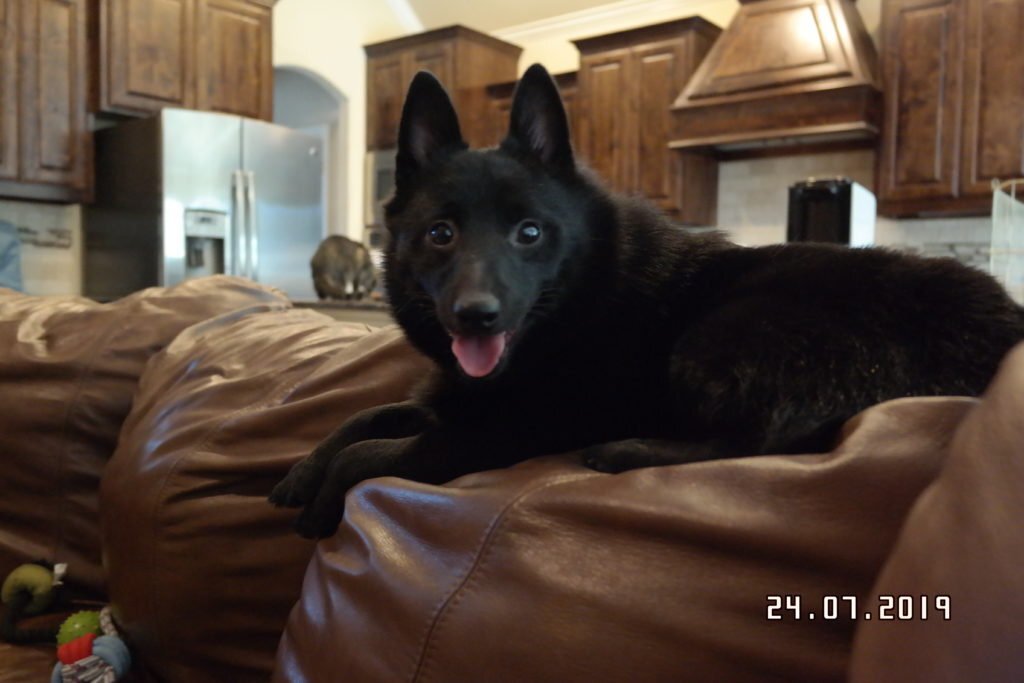 Meanwhile his Master let Spencer out of the cage, and I sat on the couch nearby. Spencer kept barking and running around and around, totally upset. I just continued to sit there and speak to him in a quiet, reassuring voice.

What followed was total havoc for a good half hour. Subsequently I received from his Master some treats and held one out in my hand for him to take. Ultimately the desire for food won out over the combativeness of this dog who was protecting his Master from an intruder into his domain.

I was expecting all of this assertiveness by Spencer to take place because his owner had alerted me but also because I had done my homework.

That is to say, I had looked up the Schipperke breed on the AKC website. Here is what the AKC said about Schipperkes.

“The Schipperke, Belgium’s “little captain,” is the traditional barge dog of the Low Countries. Curious, lively, and intense but mischievous, this little black dog is a robust, long-lived companion for whom there is never a dull moment.”

This breed is not a cuddly lap dog. Intense is a good description. Schipperkes, very protective of their Masters, do not take kindly to strangers. They love to run so it is best to have a fenced in back yard where they can zoom around. This is not a good apartment dog. It is not a good dog to take shopping.

On the other hand, this is a very good dog for anyone who desires a modicum of protection. Schipperkes are very alert, and they notice anybody who enters the yard of their master’s house. And they are very loyal dogs.

Ultimately, Spencer and I became the best of friends. There were some important steps to gaining that trust.

Firstly, right from the start I paid attention to Spencer. Dismissing a dog because you do not like its behavior only further aggravates what is bothering the dog.

Secondly, I refused to show any fear. When you show fear the dog now is in control not you.

Thirdly, I let Spencer know he was not the boss. I was. When a dog thinks it has the upper hand it will drive you right out of its territory.

The Website Dogtime has this to say about the Schipperke:

“Curious and clever, the Schipperke dog breed is often nicknamed LBD, for little black devil. He’s fearless and devoted, always on guard to protect his family from harm. His small size and easy-care coat are attractive qualities, but his intelligence and curiosity can lead him into trouble.”

“Give the Schipperke a job to do, or train him for agility, obedience, or other dog sports, and you have a well-behaved friend for life. Let him create his own entertainment or occupation and, well, don’t say we didn’t warn you.”

Schipperkes unsupervised can get into trouble really fast

For example, Spencer has attacked the leather couch in the family room. Recently, while his Master was otherwise occupied, he went into the guest bedroom, pulled the bedspread off the bed, pulled the sheets and blanket off the bed and attacked the egg crate foam topper, shredding it into a thousand pieces scattered everywhere. That is why when the Master is away Spencer is in a cage.

As the AKC said, this breed can be mischievous. However, Spencer has a trainer and these traits are being worked on.

In the end there is a sense of accomplishment working with a dog named Spencer. Caring for a cuddly lap dog is easy. Trade that for a lively, intense, hyper, and mischievous Schipperke and you have yourself a challenge. Meeting that challenge and coming out the other side with a dog named Spencer who, as a result, will now roll over on his back to have his tummy rubbed is very rewarding. And as the AKC said, there is never a dull moment.

Fred Milliken is a writer and contributor to the DFW Pet Sitting Blog. He is also a pet sitter with this company, who loves animals and lives his life to show how they impact our world every day.

Use towards your upcoming service

"DFW Pet Sitting is the only truly professionally run pet service that I have found in the Dallas area."
- Donna W.

"Our cat Susi doesn't mind when we go out of town. She gets to play with Natalia, from DFW Pet Sitting Service! And she is always a happy cat when we return!"
- Betty N.